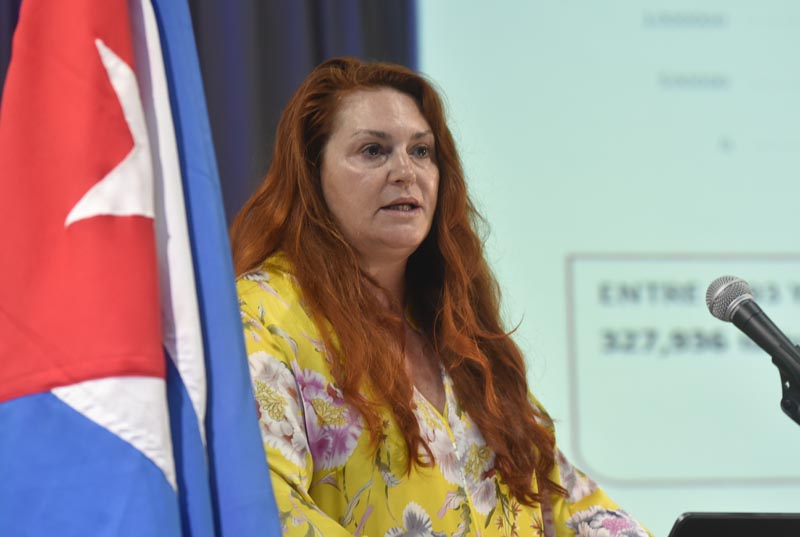 To conclude this Thursday’s presentations at the Tourism Fair of Cuba, FITCuba 2019, at San Carlos de la Cabaña Fortress, Charo Trabado, GSAR Marketing and CEO of MITM Events, presented the 23rd Edition of MITM Americas, the one that will be held this year from the October 14th to the 17th at the National Hotel of Cuba, with the sponsorship of Gran Caribe, Cubatur and Iberia Airlines, along with the hotel chains Meliá, Iberostar and MGM Muthu.

MITM is part of the strategic plan of the Ministry of Tourism of Cuba (Mintur), for the development of the tourism of events and incentives in this country.

In her presentation, and after providing an overview of MICE tourism in the world and in Spain, with relevant data on the development of that segment throughout history, the lady stuck explained that the MITM events were born in 1997, MICE and Cultural Fairs of Tourism, pioneers in the concept B2B, all over the world.

She explained that the first three Editions of MITM Americas were held in Europe, the Edition of 2000, in Guadalajara, counted for the first time with the participation of Cuban companies, composed of a delegation of 18 people and reported that up to date MITM has conducted 50 editions in 37 cities in 18 countries

These are professional fairs, closed to visitors, oriented to the quality and exclusively of business, in which the investment is guaranteed, assured the directive.

It also stated that the MITM method ensures that buyers and guests are selected solely on the basis of their business potential, and only about 20 percent of the applications received are accepted, guaranteeing that the appointments are fulfilled by 99%, which is the failure of most tourism fairs.

In addition, he said, an exclusive networking program allows contact among all participants, maximizing business opportunities.

"Since last January, we organized, in the framework of Fitur, together with IFEMA, MITM MICE & Business, which concluded with excellent results" he said.

"The 22nd edition of MITM Americas was held with a resounding success at the Meliá Cohiba last September 2018, the event was inaugurated by the Minister of Tourism of Cuba, Manuel Marrero, with more than 200 participants from 27 countries, and this is how the exhibitors of this Edition expressed it in their comments, which reflect both the quality of the attending buyers, as well as the organization and effectiveness of the event, also assured Charo

"This constancy towards excellence is what makes MITM Americas the most professional and influential MICE B2B Fair in the Americas and the Caribbean. The selected buyers are managers of corporate companies, tour operators by MICE department, international associations, incentive houses and event organizers, congresses and fairs, business travels, and others," he said.

The official recognized that, during its 88 years, the National Hotel has been the epicenter of the meetings of the most emblematic national and international characters of the contemporary history, which makes it the most ideal point

"The pre-established appointment days, the intense networking program and the National Hotel as part of the event make this Edition the ideal meeting to create strong business ties."

The CEO announced in this Edition, the participation includes a specialization Course of the MICE Segment, for professionals, taught by the professors of the prestigious University of Nebrija, by the President of COCAL and other professionals specialized in MICE tourism.

"The course is specially designed to show the competitiveness of companies in the sector, the participating exhibitors will obtain an accreditation certificate that will serve them for the access to higher courses to complete their training in these disciplines".

He also recalled that Cuba has hosted MITM Americas in 2004, 2009 and 2018, "benefit itself from an intense international promotion campaign by GSAR Marketing, making it one of the most prominent MICE destinations in the Caribbean and Latin America."

"Since 2000, the majority of Cuban companies have participated in the different editions, letting us know that they consider it the most professional fair they attend and with greater profitability in terms of generated business."

In that sense, he said, "we have no doubt that Cuban companies rely on our professionalism and on our effort to bring MICE tourism in Cuba to the top."

We produce real business fairs, our commitment to all of you for this fourth Edition in Cuba, is the same as always: Business for Cuba, leading the best international buyers of the tourism industry.