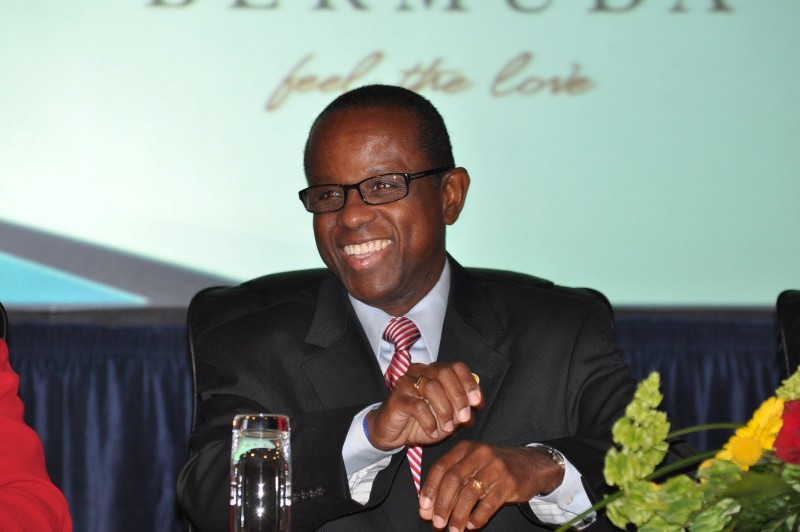 It’s official. Hugh Riley, the charismatic leader who spent ten years at the helm of the Caribbean Tourism Organization (CTO), is stepping down from the post as he has entered into a pre-retirement leave that will go fully into effect in the month of June.

Over the past decade, Caribbean News Digital had the opportunity to sit down and talk with Mr. Riley in countless fairs, tradeshows and events held in the Caribbean and elsewhere. As the people’s person he is, he always beamed a broad smile and shared his views on the Caribbean tourism industry with us.

Therefore, we thought it was important to have at least just one last conversation with a man who built on the legacy of his predecessors and put a spin of his own on the advance of travel and tourism in the region. In this last interview with the retiring CTO secretary general, he focuses on his achievements and disappointments, and spells out what the Caribbean actually needs to become a more effective and luring travel destination.

Mr. Riley, it’s been ten years at the helm of the Caribbean Tourism Organization. What do you make of your tenure as secretary general of the CTO?

It has been a great honor to serve this region. Nothing compares to representing a premium brand like the Caribbean; it is a privilege to work for the Caribbean; and I love being from the Caribbean. In addition, living and working in the Caribbean is incredible! The food, weather, entertainment, diversity of cultural experiences and the overall lifestyle all make this region a superb location for people seeking a certain quality of life. To have been able to lead an organization responsible for preparing the Caribbean to share all of that with the world, has been an extraordinary experience.

Every day there is more to learn about this region and this industry. The Caribbean is a wonderful teacher and it has taught me very valuable lessons.

What was the first thought that crossed your mind back then when you learned you had been voted to be the CTO’s next secretary general?

I knew I would have to get properly prepared for the biggest career challenge of my life! I had begun my tourism career as a representative for Barbados, so the transition from single-destination representation to being responsible for a varied collection of countries and territories across the Caribbean was a new awakening. For starters, the job of Secretary General requires oversight of an array of services – marketing, communication, advocacy, research, event planning, strategic direction, training, education, certification, business development and technical advice on a range of matters from sustainability and responsible development to sea and air transportation. What makes it even more interesting is that those services have to be offered in whatever measure and in whatever markets the members need them. The members themselves come in all shapes and sizes; they vary by language, complexity, budget, tourism dependency, political interest, regional commitment and more. That all makes for an interesting workday at the CTO!

Like the ones before you, your legacy as secretary general of the CTO hinges on both achievements and disappointments. Can you list them?

I’m always a little cautious when I hear about a legacy. I think CEOs waste far too much time talking about the past. A legacy is about yesterday. I believe the public doesn’t care as much about yesterday and yesteryear as we think they do. They really want to know about today, and most especially about tomorrow. Hopefully, some of what we achieved together at the CTO will still be relevant in the future, but here’s something to remember: Accomplishments during my tenure must be attributed to a team effort by a group of professionals at the CTO, in many instances working in close collaboration with member-countries and industry partners. These achievements, therefore, are to be credited to the CTO and not to a particular individual.

In recent years we have increased our focus on advocacy and have had some very notable successes; created methods of measuring and monitoring visitor satisfaction; vastly improved our level of engagement with our members at all levels, with regional in international entities and with all segments of the trade and consumer public including the vitally important Caribbean Diaspora. We have deliberately directed some of the focus away from simply sun/sea/sand and started ‘The Year Of’ promotions that focused on adventure, romance, wellness/rejuvenation, as well as festivals/cultural activity. We have been able to strengthen partnerships with the private sector and to create a nexus with organizations involved with training and education, human capital development, standards/certification and public health – entities whose expertise is critical to the success of Caribbean tourism. We made a fundamental change in the way Caribbean expertise is presented in the tourism sector and we substantially enhanced our involvement with business development. Some of these are the result of efforts which began long before my time; I simply built on the foundation of the two previous secretaries general – Jean Holder and Vincent Vanderpool-Wallace – and relied heavily on a cadre of competent CTO professionals to get the tasks implemented.

If I have any disappointments at all, there are these two: One is that we still haven’t managed to help more of our region’s population to fully understand the role that tourism plays in providing the salaries and benefits, the education, healthcare and overall quality of life this region enjoys. More work needs to be done to get the point across that yes, diversification is to be encouraged and all productive segments of an economy need to be supported. No question about that. But the Caribbean has massive tourism advantages. The region needs to pay close attention to the fact that the world’s most successful economies are actively engaged in attracting tourism to their shores. Why? Because this industry is a huge job-creator and foreign exchange generator. Tourism is a cash machine when it’s done right.

The other disappointment is that Caribbean tourism still isn’t as profitable as it needs to be. We have to be proud that the region is now attracting record numbers of visitors; that’s important. However, our region has not yet been able to implement some policies, to plug some leaks, and to resolve some issues that hamper the efforts to make Caribbean tourism the economic driver that it truly is. I believe we’re getting there, but there’s still work to be done.

How much did you do to make the CTO a far-reaching organization that could embrace all the Caribbean nations?

I have always been a firm believer in the value of the CTO’s Constitution and have respected it. That document – the guiding code of the organization – allows any country whose shores are washed by the Caribbean Sea to become a member of the CTO. I have tried to abide by those principles. The CTO is staffed by highly skilled professionals, some of whom are bilingual and multi-lingual, and all of whom have been committed to the Constitution’s founding purpose of Caribbean inclusiveness. The CTO should always be an organization of Dutch, English, French and Spanish-speaking Caribbean countries and territories, of all shapes and sizes. It is precisely that diversity which the region is proud of; it is precisely that harmonious existence which the world admires.

Do you strongly believe the CTO should look beyond the English-speaking Caribbean and reach out to such nations as Cuba or the Dominican Republic to become a much stronger organization?

Tourism is the Caribbean’s main business. A stronger Caribbean Tourism Organization makes the Caribbean better equipped to compete more effectively against a growing number of fierce global competitors. By pooling the region’s resources, the CTO gives the region a better chance to increase its international presence and to give a voice to all member countries and territories, big and small. Individually, the countries simply do not have the resources to reach their own potential.

As a CTO member, a destination has access to a range of regional and international resources, and direct contact with every service a tourism destination needs, usually at a better price than an individual country can acquire. The CTO offers economies of scale; it offers a place to turn to when disaster strikes; it tells the world that a particular country is associated with the strong, legendary Caribbean brand; the CTO is a repository of vital decision-making data and a resource for common interests and best practices. Those services and benefits are available for a fee. Destinations can simply pay their dues and take full advantage of the benefits in whatever quantities suit the destination. Destinations that pay their fees can lend their voices to the effort to make the CTO and the Caribbean better and stronger.

Conversely, a weaker organization makes both the region and individual states more vulnerable.

How much support did you get from your relatives and loved ones during your tenure as secretary general of the CTO?

What an interesting question! Over the years I have relied heavily on strong faith and my own private advisory team. I feel fortunate to have a very close and actively engaged family who are my personal ‘focus group’. Their consultations are frequent and extremely effective. Without those resources I could not have survived.

Based on your experience, what should the Caribbean do to step up its visibility and positioning in the face of the outbound markets?

I believe strongly in the value of public/private partnerships. When we take a look around the world at the most successful tourism marketing campaigns, they have one thing in common: partnership. Our own tourism history gives us some examples to follow: From the early days of the Beach Boys “Kokomo” campaign in the 1990s, to the Life Needs The Caribbean promotion in 2002, to the more recent Rhythm Never Stops social media campaign, the evidence suggests that strong, effective partnerships produce strong, effective results.

If the next CTO secretary general asked you about your thoughts on how to get the job done properly and smoothly, what would you tell him?

I’m not sure there’s much I can tell him/her! The secretary general of the future will need to be different from those of the past, but I suppose there will be some common threads.

Lots of listening, lots of consultation, lots of learning. And then make sure the task gets done.

Stay vigilant. The global competition for tourists’ attention is fierce and so the Caribbean can never get complacent, but the good news is that the region is blessed with precious assets. Use them well and give thanks every day.

Do the right thing. Always. Enjoy the job and let it show! There is nothing lukewarm about representing the Caribbean. Feel the passion and share it every day.