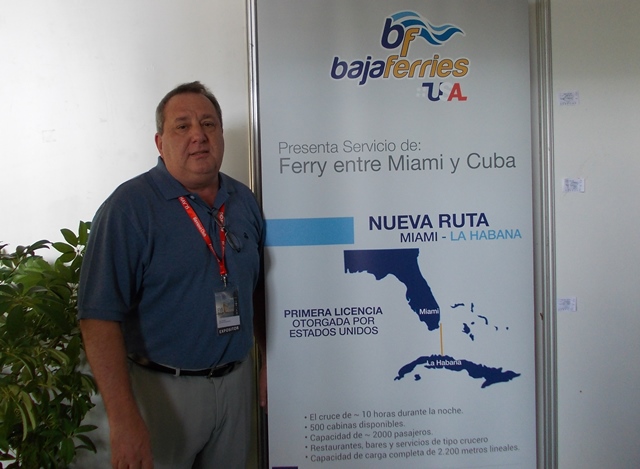 Baja Ferries USA originated in Mexico. It has provided services there since 1998. The company carries about 250,000 passengers a year. It has a similar service in San Juan, Puerto Rico, to the Dominican Republic.

Joseph Hinson, Managing Member of Baja Ferries USA, pointed out that they have been doing business in Cuba, carrying cargos, as the company has a license since 2005. “Because of that and the involvement that we had previously by carrying cargos, we’ve been very interested in being able to expand our ferry service into Cuba. It’s a natural for us, we’re already in Miami, we already have some relationships in Cuba and we have the assets, the technology and the equipment to be able to immediately start the service.”

“We have an agent here that has being representing us on the cargo side. We’re looking to have further discussions with the Cuban authorities to take the next step. In America we are completely set. We have our license, we have the terminal structure picked out and we have the specific asset of the vessel that we’d like to use. We are ready.”

Mr. Hinson said that the company is now waiting to have further discussions with the Cuban administration to see what requirements they would have of it in order to start the service. “We’ve had discussions in the Washington embassy. We had some other contacts with other authorities, but not specifically within the administration. We’re hoping to have those types of meetings very soon.”

As for the main destination in Cuba, Baja Ferries USA would sail directly from Miami to Havana, every other day, Monday-Wednesday-Friday.