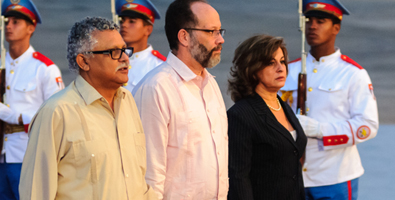 The delegations that will participate in the 7th Summit of the Association of Caribbean States (ACS) started to arrive in this capital, the Cuban Foreign Ministry said in a statement.

According to the statement, the Vice President of the Guadeloupe Regional Council, Marie-Luce Penchard, arrived on Monday to José Martí International Airport to attend the high-level meeting, which will be held on June 2-4.

Penchard is the first head of delegation to arrive, the statement said, adding that Guadalupe is one of the seven partners of the ACS, along with Aruba, Curacao, Martinique, Sint Maarten, France (representing French Guyana, St. Barthelemy and St. Martin) and the Netherlands (representing Saba, Sint Eustatius and Bonaire).

According to the ministry, the delegations of the other countries participating in the summit are expected to arrive in the coming days.

In addition to its 25 member states and seven partners, the ACS Summit will gather in Havana as observers 21 countries and nine international organizations.