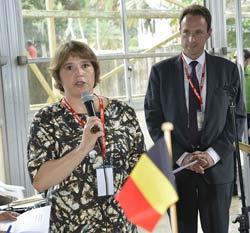 “Relations between Belgium and Cuba are on their pinnacle, especially because Belgium is one of the few European countries that have never severed trade ties with Havana,” said Cécile Jodogne, Belgium’s State Secretary of Foreign Trade, during the Day of Belgium at FIHAV 2015.

After eight years without having a high-ranking Belgian official in Cuba, Mrs. Jodogne, who also leads the French Commonwealth Commission (COCOF) in her country, underscored the significance of having companies from the three regions of her nation attend an event like FIHAV.

“In this framework, Belgium is covering 330 square meters of exhibition surface with exhibitors from the pharmaceutical industry, telecoms, audiovisuals and the food industry,” said the State Secretary for Foreign Trade.

In the face of the new opportunities for foreign investment and the possibilities this fair opens up, Cécile Jodogne expressed that “more than ever before, conditions are right in the course of this weeklong event to get good business contacts going and come up with development opportunities for further economic activities in Cuba.”

Relations with the island nation are not limited to trade and commerce, but also in the kind of cultural exchange Belgium shares with Cuba, she added. “Yesterday we signed a memorandum of understanding with the Office of the Havana Historian in an effort to contribute with our own experience in terms of historic heritage management,” Mrs. Jodogne pointed out.