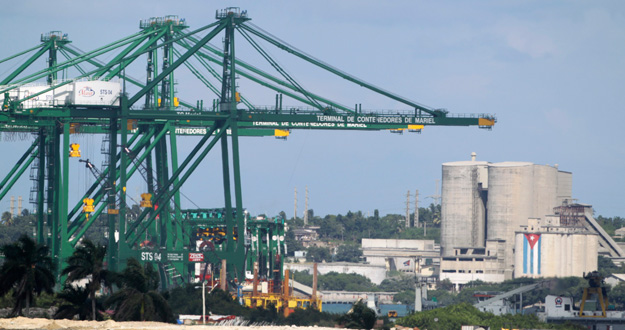 Cuba officially opened its new Mariel “megaport” on Monday, hoping the project will put it on the map as a regional shipping hub despite scant foreign investment and the US economic embargo.

Leading the ceremony were Cuban President Raul Castro and his Brazilian counterpart Dilma Rousseff, whose country provided technical and financial help for the port’s construction in the joint project.

Only the first 700 meters (2,300 feet) of what is slated to be a 2,400-meter wharf were inaugurated, with hopes the project — when completed — will welcome one million containers per year.

“From this moment, Mariel is part of the Cuban and Latin American port system,” Castro said. “It’s the first phase of the project, we must continue working.”

After cutting an inaugural ribbon with Castro, Rousseff said “Brazil is proud to be associated with Cuba on this project, the first large terminal port for containers in the Caribbean.”

But Mariel, located 45 kilometers (28 miles) west of Havana, still faces major hurdles — including lack of investment and the American economic embargo placed on the communist island for the last half-century.

The first shipment, unloaded smoothly, was frozen chicken from the United States. Despite the embargo, American farmers can sell food to Cuba as long as Havana pays in cash.

Cuba is hoping to establish itself as a regional hub for shipments from Asia after an expansion of the Panama Canal is completed in 2015, allowing for the passing of larger ships carrying up to 12,000 containers.

The largest infrastructure project ever launched by Cuba, Mariel will cover some 465 square kilometers and include a free-trade zone where foreign-owned factories can produce goods for other markets.

Authorities are hoping the goods redistributed across the Atlantic from Cuba will allow the island nation to reassume the status of commercial nerve center it once held during the Spanish empire’s grasp on Latin America.

Cuban authorities have already indicated that they will target high-tech businesses, particularly in agro-business, biotechnology and information technology.

According to Ana Igarza, director of Mariel’s Special Development Zone (ZED), “investment proposals” have already been put forth by businesses in Brazil, Mexico, Argentina, Chile and the Dominican Republic.

Rousseff said Monday that Brazil wants to be a “first-order economically to Cuba.” Her government already financed $802 million of the first phase of the project and $290 million towards its free-trade commercial zone.

And a logistical base is already in place for foreign businesses related to oil. A highway and railway linking the port to Havana are under construction.

But all these projects require capital that is still largely lacking, particularly in light of the US embargo.

“We need investments of around $3 billion per year,” Cuban economist Juan Triana, of the University of Havana, recently estimated.

The opening of the megaport comes as the communist country prepares to push through a new law on foreign investment in March meant to attract much-needed capital for the country’s sagging Soviet-style economic system.

Built by the Brazilian company Odebrecht with the help of a $600 million credit from the state, the port will be managed by PSA International of Singapore, which already runs several of the world’s largest ports.

Monday’s ceremony was attended by heads of state who participated in the inauguration on the sidelines of the summit of the Community of Latin American and Caribbean States (CELAC).