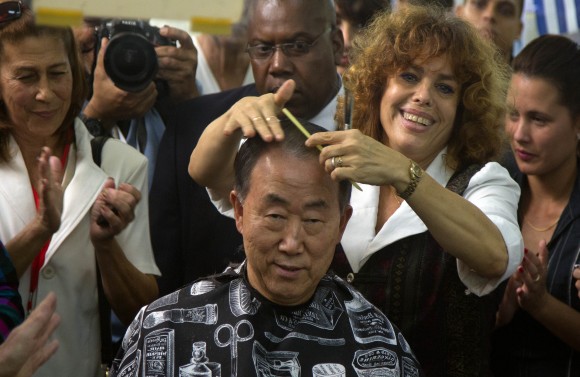 The Secretary General of the UN Ban Ki-moon has played tourists Monday in the old city of Havana, where he got his picture taken with children, joked with tourists and had his hair cut by a local hairdresser.

"I am very impressed by the efforts made to restore the old town," he assured reporters Ban Ki-moon with his wife Yoo-Taek Coon and curator of the old town Eusebio Leal.

Dressed in a traditional Cuban guayabera, long white shirt with four pockets, the Secretary General of the UN, came to participate on Tuesday and Wednesday at a regional summit joked with French tourists who recognized, before joining hairdresser and applying for a haircut.

"He welcomed us with great effusion, sat down and asked me to cut his hair," said the hairdresser with emotion, Josefina Hernandez, incredulous at the simplicity of the UN chief. Arrived in the morning to attend the second summit of the Community of Latin American and Caribbean (CELAC), Ban Ki-moon visited a school and between two pictures, asked the children to "work hard".

More seriously, the Secretary General of the UN has met with Mariel Castro, daughter of President Raul Castro and President of the Center for Sexual Education (Cenesex) about a campaign against domestic violence, and the vice- Cuban President Marino Murillo, in charge of the supervision of economic reforms in the country.

According to his entourage, Ban Ki-moon should also meet the number two Cuban Miguel Diaz-Canel, President Esteban Lazo of Parliament and the Minister of Foreign Investment Rodrigo Malmierca. Upon his arrival, he also hoped to meet with President Raul Castro and "how the UN can support" reforms for three years by the communist regime to "update" its business model.