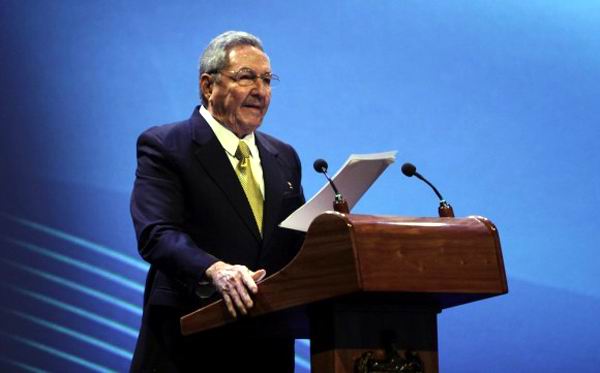 Cuban President Raul Castro challenged Latin American and Caribbean leaders on Tuesday to improve health care and education, telling a regional summit they have the natural resources to eradicate poverty but may lack the political will.

The speech also listed a series of Latin American grievances that directly or indirectly involve the United States, attempting to unify the 33 countries at the summit against their neighbor to the north, which was not invited.

"We have every possibility to abolish illiteracy," Castro told leaders of the Community of Latin American and Caribbean States (CELAC). "We should have the political will to do it."

CELAC excludes the United States and Canada, both members of traditional forums such as the Organization of American States and the Summit of the Americas, groups that tend to be dominated by Washington.

The speech by the leader of the only communist state in the hemisphere reminded neighbors of what Cuba considers two of its greatest achievements since its 1959 revolution, free health care and education.

Cuba often cites health care and education as human rights, while critics of the country's government point to the island's one-party rule and restrictions on free speech.

Cuban dissidents were expected to raise issues of human rights at an ad hoc democracy forum outside the confines of the summit. They have complained that Cuban authorities have detained at least 40 activists in recent days as a part of a campaign of harassment before the summit.

Castro, who succeeded his ailing older brother, Fidel Castro, as president in 2008, held a moment of silence for former Venezuelan President Hugo Chavez, whose oil subsidies for Cuba have helped sustain the economy. This is the first regional summit since Chavez died of cancer last March at age 58.

Several regional leaders including Brazilian President Dilma Rousseff and Argentine President Cristina Fernandez have held private sessions with Fidel Castro, 87. State media photos of the meetings showed a smiling Fidel Castro seated and wearing a track suit, which he has preferred over military fatigues since undergoing intestinal surgery in 2006.